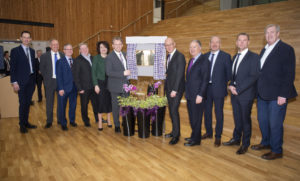 Bertha Park High School, the first new secondary school in Perth and Kinross for more than 40 years, was opened by the Scottish Government's Deputy First Minister and Cabinet Secretary for Education and Skills, John Swinney MSP.

In August 2019, Bertha Park High School welcomed its first group of S1 and S2 pupils into the brand new facilities located in the north west part of Perth.

The construction of the £32.5m school forms a key element of an ongoing capital programme of upgrades and improvements to the Perth & Kinross Council school estate. Its development also reflects the significant growth in Perth's population projected in the very near future and the impact of this on existing secondary schools' capacities.

Mr Swinney, who helped get the building works off the ground with a turf-cutting ceremony on site in November 2017, was welcomed by senior Council officials, elected members, Headteacher Stuart Clyde and pupils and staff. He said: “It is terrific to see the progress that has been made since having cut the turf for the Bertha Park High School project.

“Pupils and teachers at Bertha Park benefit from one of the most technologically advanced schools in the UK. The design of the campus allows for innovative digital learning, helping equip pupils with the skills they will need when they move into work, training or further study.

Councillor Caroline Shiers, Convener of the Council's Lifelong Learning Committee, commented: "Bertha Park High School has given us the opportunity to build a new school community from the ground up, in a fresh and innovative learning and teaching environment. It was very exciting to see the school come to life in August 2019 with the first cohort of pupils and I am very pleased that the Deputy First Minister has been able to return today to officially open Bertha Park High School."

Gary Bushnell, Chief Executive, hub East Central Scotland, said: “It has been a privilege to deliver this unique new school for Perth & Kinross Council. It is the sixth school that we have completed for the Council in recent years and we worked closely with all of the stakeholders involved to successfully manage the project. The school creates a new digital learning centre of excellence in a contemporary environment that will benefit the community for many years to come.”

Kevin Dickson, Managing Director, Robertson Tayside, said: “The official opening of Bertha Park High School celebrates not only a new era in education for Perth & Kinross Council but also what can be achieved by effective partnership working. As main contractor, we’re hugely proud of the completed school, which has exceeded all expectations to stand apart from almost any other in Scotland. Since opening its doors in August, pupils and staff have seen first-hand the impact the built environment can have on their educational experience. Of course, this is just the start of the Bertha Park success story and everyone at Robertson is excited to see how the school develops in the years ahead. We also look forward to working again with Perth & Kinross Council and hub East Scotland to deliver more transformational education projects.”