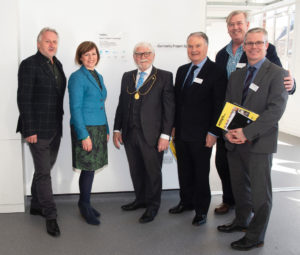 The initiative was successfully delivered by hub East Central Scotland for Perth and Kinross Council and Wasps Artists’ Studios. Artists, ranging from jewellery makers and illustrators have already taken up residence in the new venture at the former St John’s Primary School.

The venue also contains a new gallery, The Gannochy Project Space, where the first exhibition will run until the end of March.

Audrey Carlin, Chief Executive of Wasps, said: “We have been overwhelmed by the enthusiasm that artists, makers and creative businesses have shown for the new Perth Creative Exchange and it has been amazing to see this old school building come back to life.”

Provost Dennis Melloy added: “We are creating an environment that encourages creative and artistic growth, while retaining and attracting talent to the City of Perth.  Not only has Perth Creative Exchange attracted resident creative people from across Scotland to the Fair City, but this splendid facility is already fully let and expected to support 66 full time equivalent jobs and generate wage earnings of just under £1 million per annum across the local economy.”